March 29, 2020
My son is 30 today. We had planned to spend his birthday here in the Cotswolds, with his girlfriend and my daughter and his grandmother and whoever else wanted to come, but of course we can't. We are FaceTiming instead. Happy birthday, Rory!
I feel a bit sad about this, but I'm trying to stay cheerful. The family is all well, albeit spread out across southern England, and I don't really have much to complain about.
So I took myself into the garden this morning to see if any blossom had appeared yet. Boy, was it cold! The temperature is actually 8C (46F) but with a blustery north-east wind blowing, it feels more like -8C (17F). I had to keep scuttling back inside to get my fingers warm.
I always think I have two mature ornamental cherry trees in the garden, but in fact I inherited three. One has grown horizontally over the paddock next door after being crowded out for years by a horse chestnut and a beech, so it doesn't look as if it's actually in my garden. My nickname for it is the Great Escaper.
Since moving here, I have also planted a Tibetan cherry (Prunus serrula tibetica) with gorgeous glossy chestnut bark, a flagpole cherry (Prunus 'Amanogawa'), and several Mount Fuji cherries (Prunus incisa 'Kojo-no-mai') which are really more shrubs than trees.
Other additions include magnolias (M. soulangeana and M.stellata 'Royal Star') and several amelanchiers. By the gate is a hawthorn, which self-seeded, but which I've trained into a mini tree.
The cherries never come into blossom together. There are two near each other at the side of the house, and one is always a couple of weeks ahead of the other.
The Mount Fuji cherries are the heroines of the spring garden - reliably into flower by the middle of March. They are beginning to go over and sprout leaves, so my plan of having everything frothing into blossom at once seems doomed to failure this year, as every year. Sometimes I wonder why I bother gardening?
Here are some pictures: 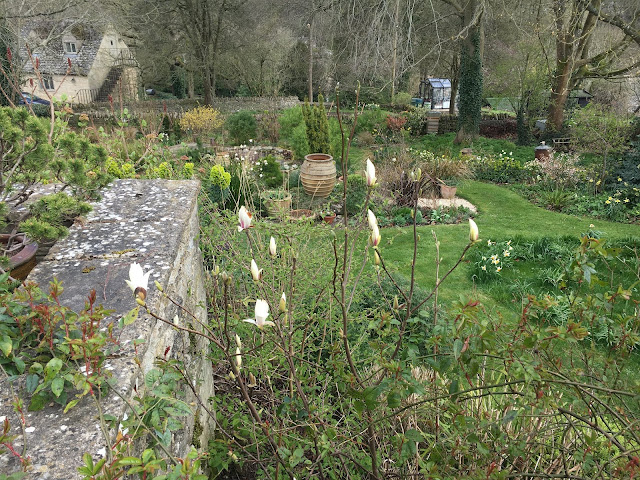 The Magnolia soulangeana seems a bit tentative about opening its flowers. Don't blame you, mate! This was a rescue plant from a local garden centre, which I got half price at the end of the season. 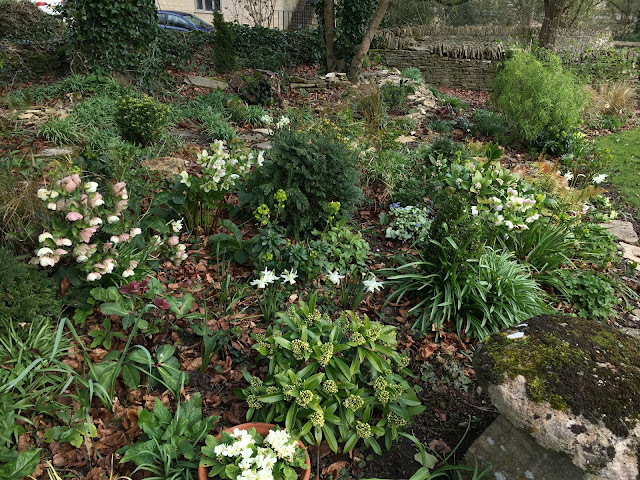 Over in the winter garden (as I rather pretentiously call it), the snowdrops have gone over, but the hellebores have been partying for weeks. They've now been joined by Narcissus 'Thalia' and Brunnera macrophylla  'Alexander's Great' 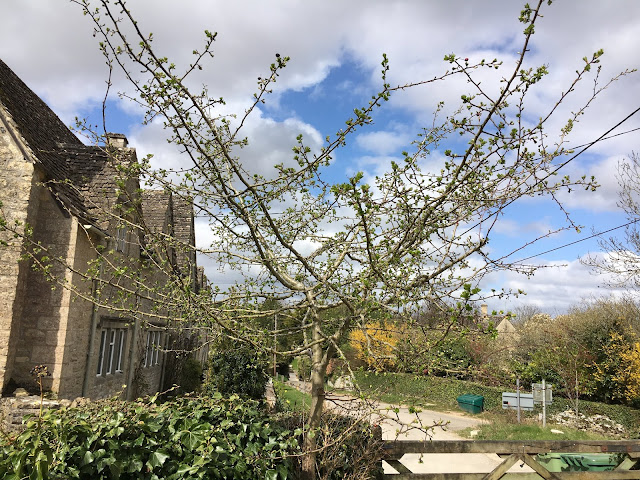 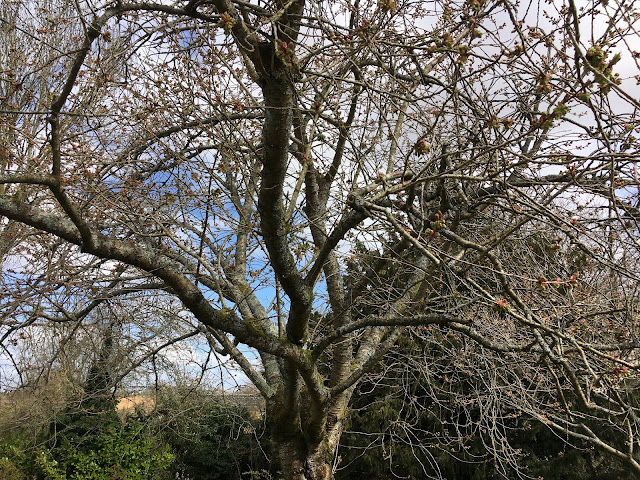 Or on the first cherry. Think this is 'Ukon' - it has quite creamy flowers 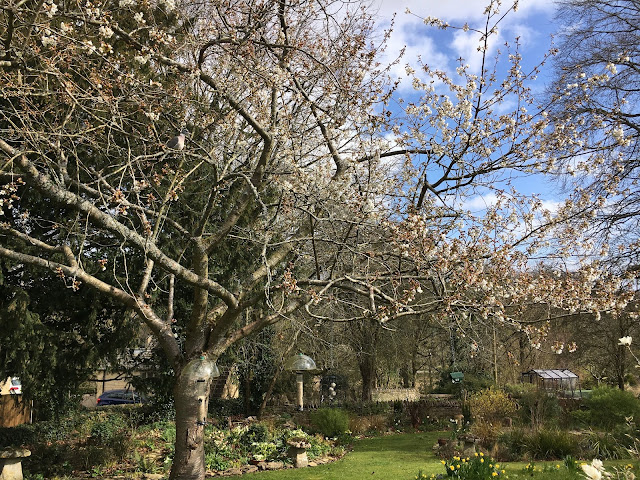 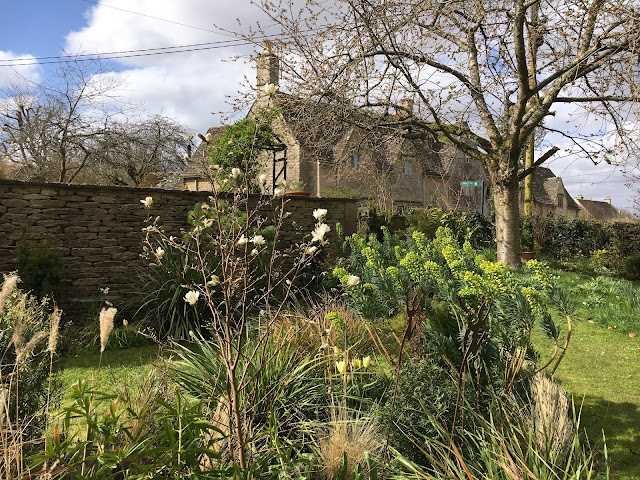 This is a waterlily magnolia, M. stellata 'Royal Star'. It's not convinced spring is really here. 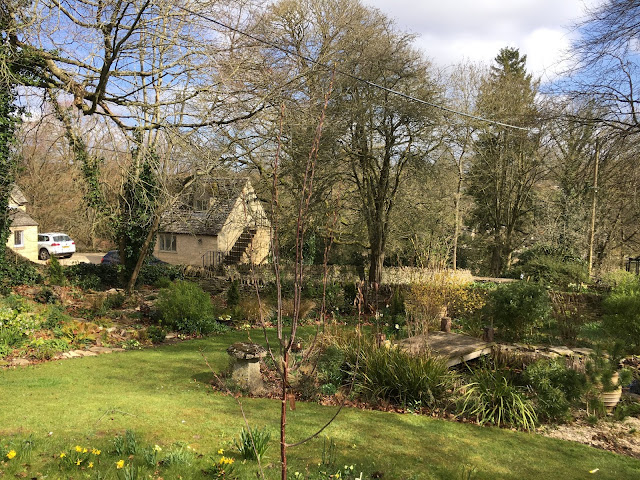 The Tibetan cherry, which I planted in the autumn. Nothing yet! 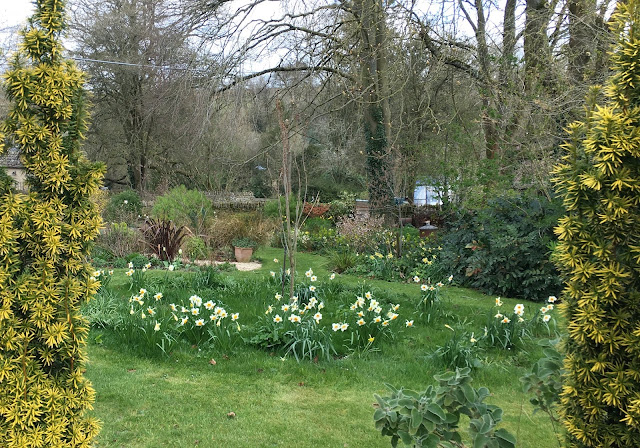 The flagpole cherry, planted two years ago. Likewise, nothing yet. 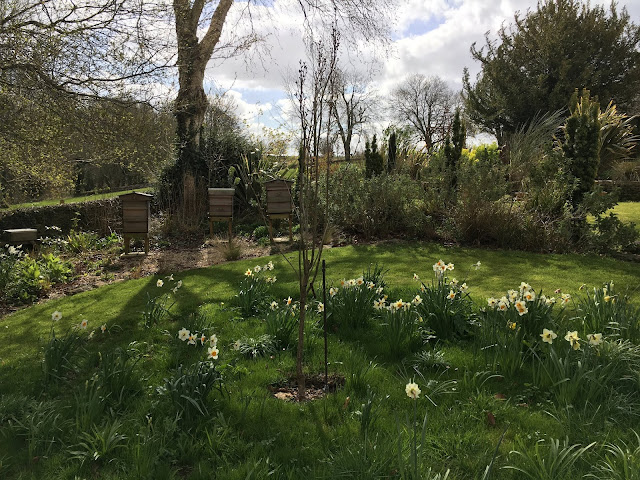 Here's another view of the flagpole cherry with its circle of daffodils, showing the beehives behind. It's been a fairly mild winter, and the bees have come through it in good shape. They won't fly if the temperature is under 10C (50F), and certainly not in a cold wind. I don't blame them. The daffodils are 'Geranium', 'Barrett Browning' and possibly 'Verger' 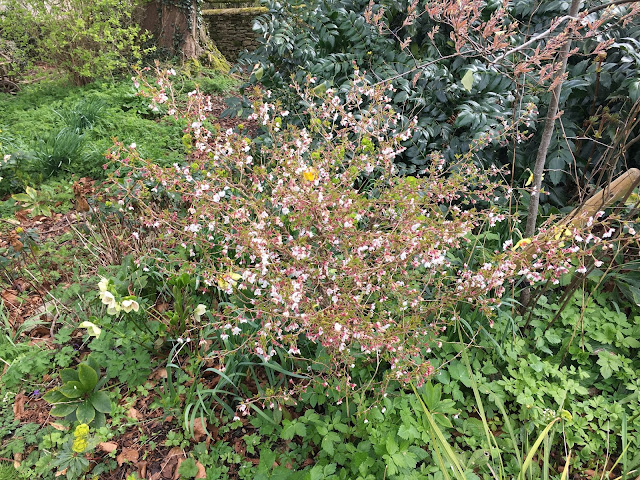 Thank goodness for Prunus 'Kojo-no-mai', which is happy in a pot as well as in the ground.
At top right, you can just see the copper leaves of an amelanchier. 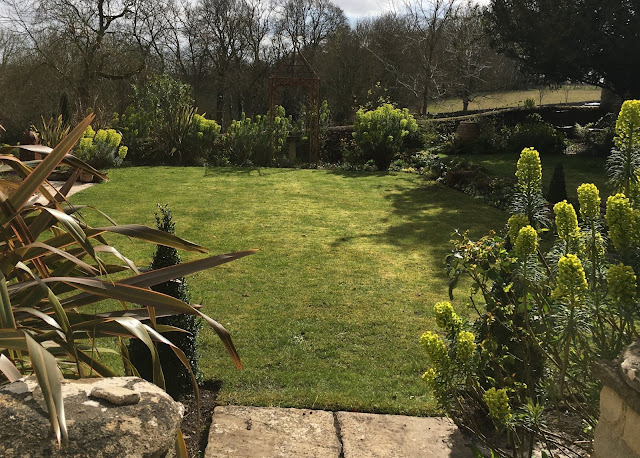 Thank goodness, too, for Euphorbia characias subsp. wulfenii. So long as there isn't a really hard frost, they will flower happily at this time of the year. Their lime-green bracts light up the garden. 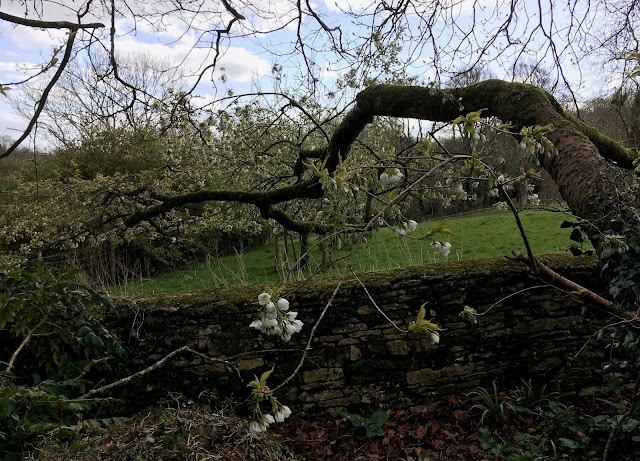 And here's the Great Escaper, stretching its trunk out over next door's paddock in an attempt
to make the most of the sunshine.

Rock rose said…
Thank you for the walk around your early spring garden. Lovely as ever and full of promise for the weeks to come. Happy 30th to Rory too.
29 March 2020 at 14:28

Lisa Wagner said…
Enjoy the emergence of spring! We’re having an early one, so far without a late freeze, so the cherries and magnolias have been beautiful. Every day there are more leaves visible, too. Thanks for sharing you garden!
29 March 2020 at 15:07