George says: gild (or rather grow) the lily 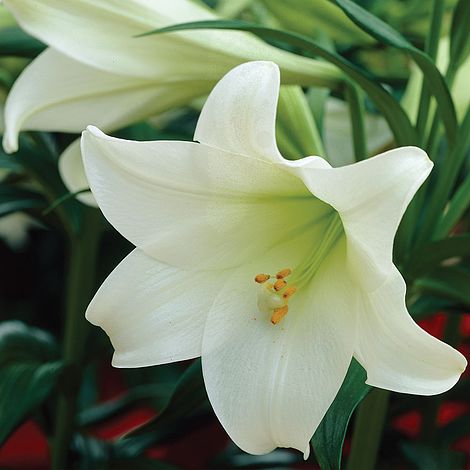 I'm fairly laid back about insects in the garden. I keep honeybees, so I don't like using bug sprays. But if there is one critter that brings out any kind of murderous instinct in me, it is the lily beetle.
These bright scarlet pests lay their eggs on lilies, cardiocrinums and fritillaries (all members of the lily family), and not only do the larvae eat the leaves but they live in lumps of their own excrement. So not only do you have a defoliated plant, but one that is covered in poo.
Lily beetles are easy to spot, but difficult to catch. They have a habit of turning upside down, or even dropping to the earth, the minute you try to lay a finger on them. Best time to catch the little b****** is when they are mating, because they are too busy concentrating on what they are doing to perform the upside down trick. (Well, wouldn't you be?)
I agree with Monty Don that the best way to control lily beetle is with a nice hard thumbnail, which you deploy in a combination of squish and sever.
However, I see that there is a lily beetle deterrent spray now available from Grazers which is supposed to be eco-friendly, and safe for people, pets and wildlife.
I have no evidence to suggest that it isn't eco-friendly (Grazers specialise in deterrents as opposed to pesticides) but on the other hand, I have no proof that it is, because the active ingredient is not listed on any publicity I have seen. However, if you want an organic substitute, Neem oil, from the neem tree, is celebrated in India for its organic pesticidal properties, and also as a source of medicine and timber (it's related to mahogany).
If you want to make your own spray, Harts, the lily specialists, advise mixing 5ml Neem oil with one litre of water, and a squirt of washing-up liquid. Spray lilies with a fresh mixture every week. You can buy Neem oil on Amazon or on eBay.
Anyway, that's the boring bit. Now let George tell you how to grow gorgeous lilies.

Lilies are outstanding for their perfume and glorious colours, ideal for herbaceous borders, and they also grow well in patio containers. The only downside is that the flowers only last for three to four weeks.
You must have lilies in a herbaceous border. They have a bold short life and flowering period but the perfume and delight of their presence is fantastic.
When selecting a variety, you need first to consider the position in which they are going to grow. There are various growing heights to lilies, so you need to ask whether the size of your border can accommodate a planting of 2/3 groups of bulbs.
Popular border lilies are the Regal type (Lilium regale) which Victoria grows in her garden, but there are lots of good new varieties that will also give an abundance of flower and colour.
When planting a selected variety, use at least five bulbs in a group and add a good humus-rich compost (such as John Innes No 2) all around. Firm in well, and watch out for rodents such as voles and squirrels. They like to nibble away at the bulbs and will completely spoil your show of lilies.
Beware of the lily beetle. This joker lives in the soil but will climb your lily stem and lay eggs on the underside of the leaves. When the larvae hatch they will eat away your foliage at a fast rate. You can clean off leaves by hand or use a bug spray killer. It is best to spray before the beetle appears, because the fumes from the spray can deter it. Spray at least twice a week in the in the cool of the evening.
Then you have to contend with blackfly, which will drop in with no warning in their thousands. Use the same formula as with the lily beetle. 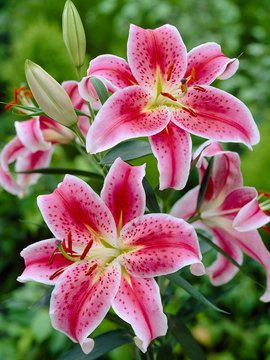 Modern hybridizing has created short-stemmed varieties of lilies which can be grown in containers, such as ‘Stargazer’ (above). Plant five bulbs to each container, and when the plants are about to come into flower, place three canes in a tripod fashion, and tie in the stems. This will keep your flowering heads upright during windy days, and also prevent the heavy flowerhead from breaking.
Lilies have become a favourite flower for household decoration. Popular varieties are ‘Stargazer’ with its bright pink stripes, and white ‘Casa Blanca’. On a warm evening the perfume can be almost overpowering. You can remove the stamens but be careful of the pollen as it will stain your clothes.
When container plants have finished flowering, cut foliage down to within a foot of the top of the container, allow a period for the bulb to absorb its winter strength, then in the autumn shake out of the soil and store in a frost-free environment.
Bulbs in herbaceous borders can stay in the ground but cover them with an extra layer of soil for protection. 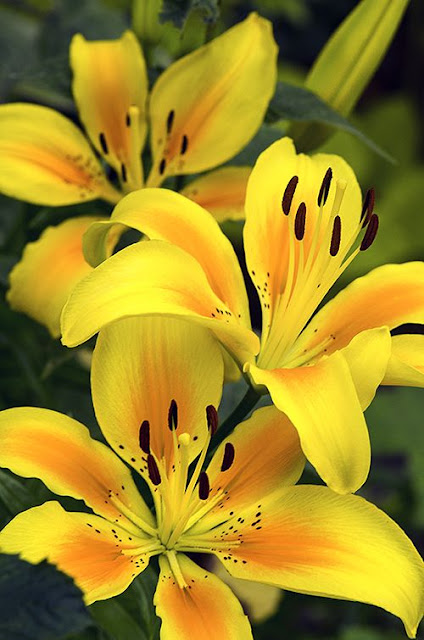 On a calm summer’s evening when sitting in your garden you can be assured that you will experience the heavenly fragrance of your lilies.
As you will appreciate, there are many species of flowers that bear the name Lily: Tiger, Water, Trumpet, Calla, Peruvian (Alstroemeria), and many more. All these types have their own different growing habits and are not grown in the same way as the Oriental Lily.
Lilies have been cultivated for more than 3,000 years. The white Madonna Lily can be found in a famous fresco dating from 1,500BC which adorns the Minoan Palace of Knossos.
With the coming of Christianity, it became a symbol of purity, and in paintings of the Annunciation, the angel Gabriel is often shown handing the Virgin Mary a Madonna lily stem. St Anthony of Padua, born in Lisbon in 1195, and a great preacher and contemporary of St Francis of Assisi, is also often depicted with a Madonna lily. 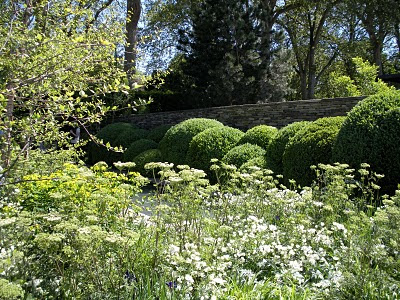