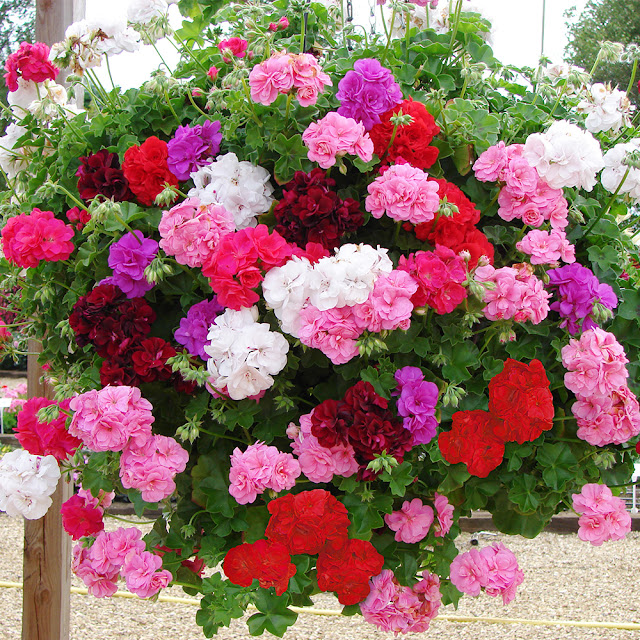 Ivy-leaved pelargoniums growing in a hanging basket outside George's house

Pelargoniums or geraniums? Storksbills or cranesbills? What's the difference and does it matter?
We all talk about geraniums when we mean pelargoniums, but for the sake of clarity (and because I am pedantic) I have used the term pelargoniums throughout George's article. This is to distinguish them from hardy perennial geraniums, which can be grown in our climate all year round without any protection.
We can blame the confusion about the name on Carl Linnaeus, the Swedish botanist who came up with the idea of binomial nomenclature - the idea of giving every living thing a name that described its genus and its species: for example, Homo sapiens.
In 1753, Linnaeus formally described what we now call pelargoniums and geraniums as geraniums. It wasn't until 1789 that the French botanist Charles L'Heritier reclassified the two groups. (Have you ever noticed that when botanists reclassify plants, they never give them short names that are easy to remember, but even longer, more complicated names?)
In a way, Carl Linnaeus himself was "reclassified", because Linnaeus is a Latinisation of his original name, Carl von Linne.
The names of geranium and pelargonium both derive from ancient Greek, from "geranos", meaning stork, and "pelargos", meaning crane. The name for the stork and crane family, Ciconiidae, comes from the Latin for stork, which is ciconia. What's the difference between a stork and a crane? I have absolutely no idea.
Confused? Never mind, let George tell you how to grown pelargoniums. 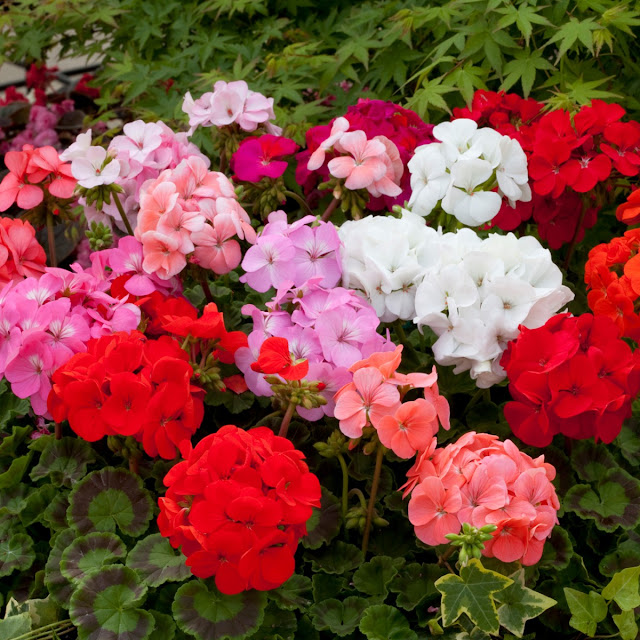 Zonal pelargoniums, with the distinctive ringed markings on the leaves clearly visible

The pelargonium family includes zonal, regal, and ivy leaf, plus those with scented foliage. They all flower in abundance throughout the summer in a wonderful range of colours.
Let’s first consider the zonal type. These are the named varieties grown from leaf cuttings, which will produce large flowers of a double and semi-double nature in many colours.
Regal pelargoniums are also grown from leaf cuttings but produce flowers of a single nature. They are larger in size, plus the flower colours can be two- toned with an eye. They also come in straight vivid colours.
Ivy pelargoniums are also grown from cuttings in many named varieties. These are the trailing types ideal for hanging baskets and window boxes. The range of colours is fantastic with bi-colours and brilliant shades of self-colours.
Pelargoniums grown from seed tend to be of the single type flowers used mainly for bedding out in the garden. They will give a good show during warm weather but in stormy weather they shatter and lose the flowers. However, one must also consider that they are an inexpensive way of providing colour all summer long.
There are also scented varieties, whose leaves give off fragrance when rubbed or crushed. They can have variegated foliage in gold and silver and are very attractive.
All pelargoniums like warm weather and do well in dry conditions, but care should be given to planted containers where the moisture can be absorbed by the containers, especially when full of roots. In this situation, watering is necessary to maintain a display of flower.
Standard and pyramid shapes are in fashion at the moment. If you want to grow your own, you need a heated greenhouse, because you need to grow autumn-struck cuttings up single stems during the winter, so that the formation can be completed in the spring. If successful, choose a draught-free area when placing outside – this will be help keep the plant upright on windy days.
Keeping any type of pelargonium indoors can be difficult unless you have a conservatory or a bay window with plenty of light. A radiator below can be a problem because too much heat will make the leaves go yellow and the plant will become leggy, plus it will stress out.
Pelargoniums do well in a soil-based compost. This keeps the growth in a compact shape, and of a hardy nature, which allows the plant to be free standing and produce many flowers throughout the summer.
Feeding with a high nitrogen fertilizer is necessary when the root formation is strong and the plant is in full flower. Apply this by adding to the watering sequence.
None of the pelargonium species is hardy in the UK so it’s necessary to dig up and place in pots, then try over-wintering in the garage or shed, watering once a month. You will lose all the foliage, but come the spring you can start the plant into new growth and cut back the stalks to shape the plant.

The pelargoniums we grow as bedding in the UK are native to South Africa, where more than 200 species still grow wild. They were introduced to Europe by Dutch traders in the 18th century.