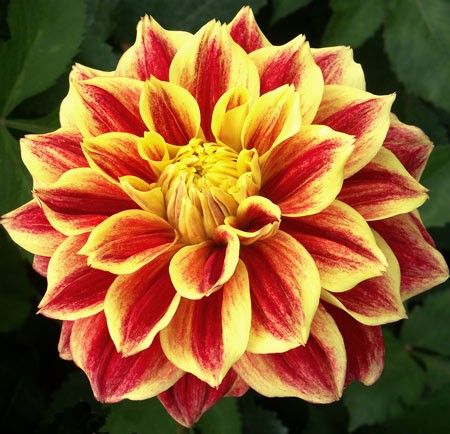 It always makes me want to giggle when I hear American gardening friends talking about DAH-lias. It reminds me of Patsy and Eddy in the television comedy Absolutely Fabulous.
Yet my American friends are right (and I am very rude to want to giggle). DAY-lias, as we call them in the UK, were named after the 18th-century Swedish botanist Anders Dahl, a student of Carl Linnaeus (yes, him again), whose name is pronounced the same way as the Dahl in Roald Dahl.
However you pronounce them, dahlias are superb plants with spectacular flowers. Native to central America, all the thousands and thousands of varieties we have today are descended from plant material sent back to Spain in 1789.
By the way, if you are the sort of person who loves soft pastel colours (and who doesn't?), there are dozens of dahlias in soft subtle colours as well as the traditional bright jewel shades. Check out these soft pink ones below. 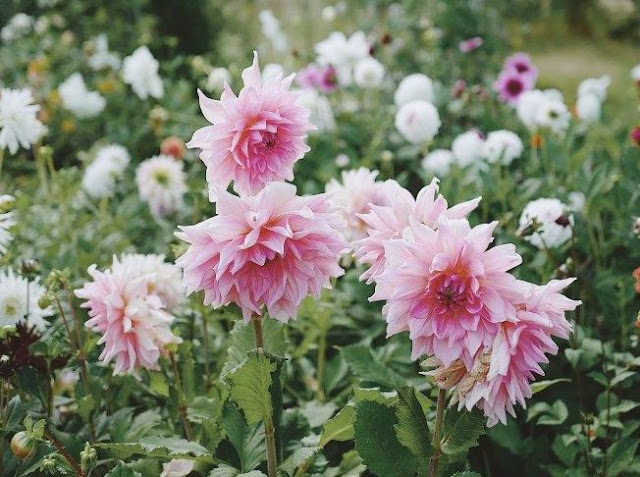 I've always been a bit wary of growing dahlias because they are prone to attack by slugs and snails, and I hate using slug pellets because I worry they will harm birds or pets. In my limited experience, the varieties that suffer least are the cactus-flowered dahlias - the ones with the huge shaggy flowers and large green leaves.
This summer, however, I have gravelled over much of the area around the pond, which helps deter pesky molluscs, so I'm going to try growing my two precious dahlias there.
I'll need all the help I can get, so it's just as well that George has come up with this advice: 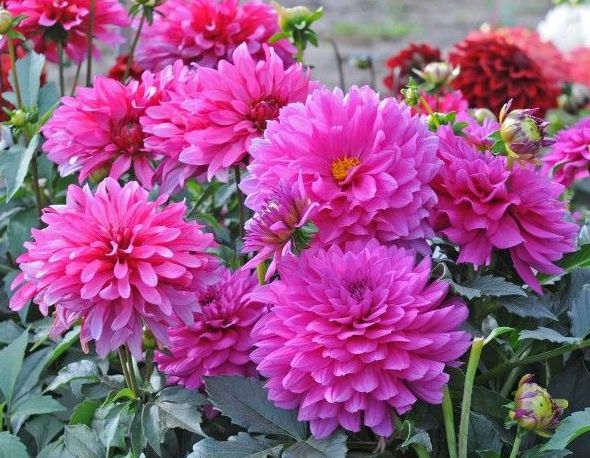 Dahlias come in different forms of flowers. There are decorative, the large soup plate type and the medium traditional size, followed by the cactus dahlia, pompom dahlia, and the range of single flower type in named varieties, all in a huge array of colours.
In the Sixties and Seventies, dahlias were all the rage at the big floral shows such as Shrewsbury and Southport. Growers such as Stuart Ogg of Swanley, Kent, Treseders of Cardiff and Bell Bros of Yorkshire all displayed magnificent exhibits and won gold medals.
They have recently come into fashion again, especially the ‘Bishop’ series, with its bright flowers and dark foliage, and have been popularised by gardeners such as the late Christopher Lloyd at Great Dixter.
Growing dahlias from tubers is one way of getting sturdy plants as they are second-year plants. When they build up the foliage growth, you need to insert three canes in a tripod fashion, then tie in and repeat the process as the plant grows. This procedure will allow the plant to sustain high winds (and we know all about those in the Cotswolds!) and the weight of the flowerheads when mature.
Young first-year plants from cuttings will soon establish within the garden. They will not make the same growth as tubers but will give longer stemmed flowers. There will be limitations on the quantity of flowers but they are also forming the tuber for next year’s plants.
In dry conditions water regularly, and mulch around the base with a good manure. This retains the moisture and feeds the plant.
When you have flowers, beware of earwigs. They love to nibble at the petals, and large numbers can play havoc with your flower heads. The best remedy is to place a cane in the middle of the dahlia growth. Put some dried grass or hay in the bottom of a flowerpot and push down tight, then place the pot upside down on the cane. The earwigs will run up the cane into the pot and in the morning you can remove the pot and destroy the pests.
Blackfly are another pest to watch out for. They will swarm in and cling to the stems en masse and suck away at the sap. Use a bug gun to kill the perishers.
In the autumn when the first frost has killed off your dahlias, cut away the growth six inches above the tuber, dig up with a little soil attached, then place in a frost-free environment such as a garage or shed. Leave there until the spring when you can either take cuttings or just plant out again.
If you wish to be enterprising and take cuttings, you will need a greenhouse with a heated propagator.
Now if you wish to be an exhibitionist seeking perfect flowers you can take out the buds of the second flowers on the stem. This needs to be carried out in the early stages of growth, and the reward is long stems and a perfect flower. With this procedure you reduce the number of flowers.
For best results, keep cutting your flowers and use them to fill vases indoors. The plant will respond with more flowers. 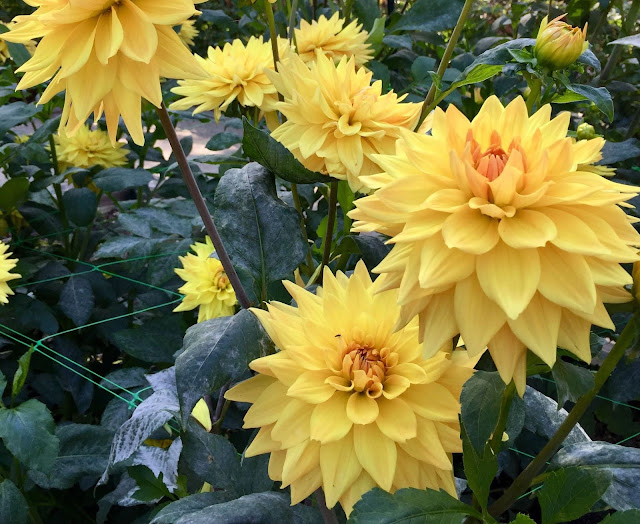 Dahlias originated in Mexico, and were first grown in Europe at the end of the 18th century by Abbe Antonio Jose Cavanilles at the Royal Botanical Gardens of Madrid. He named the species after the Swedish botanist Anders Dahl.