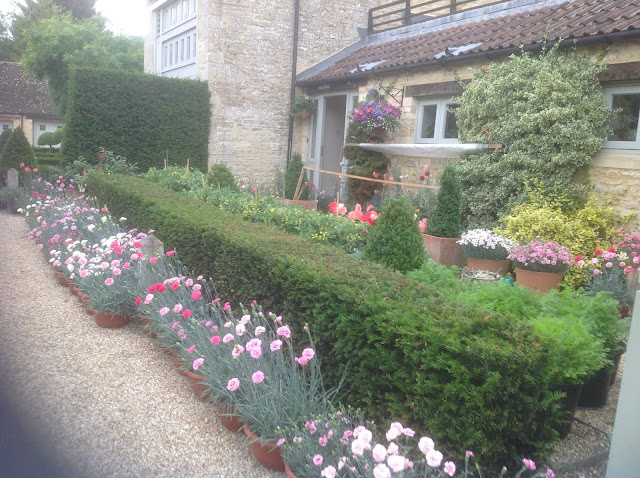 Scents trigger memories for all of us, and the fragrances that remind us of happy times are the most precious of all. For me, scented pinks rank alongside wallflowers and fresh-mown grass when it comes to transporting me to another world of sunshine and flowers.

We used to have them growing in our garden in London when I was a child, and I remember being disappointed that when you went to the florist, the spray carnations - which look so similar - had no scent whatsoever.
George Blackwell always has a fabulous display of pinks outside his house (see picture above), and I was lucky enough to scrounge some from him last year. By following his instructions, I got mine through the winter, and they are now sunning themselves on the terrace, in preparation for flowering again.
I kept one of my pots under glass during the winter (cold frame or greenhouse) and left the other one outside, to see how it got on. Needless to say, the one under glass looks a lot healthier than the one left out in the cold.
All the pictures on this post are of George's own pinks. For the colour descriptions, I've used  those in Whetman Pinks' catalogue. Whetmans are Chelsea medal holders, but more importantly, I think their colour descriptions are very accurate. Sometimes, when you look up a flower on the internet, and read the description, you often end up wondering whether it's red, pink, purple or blue.
Follow George's advice below and you can have a wonderful display – and a garden filled with perfume – as well. 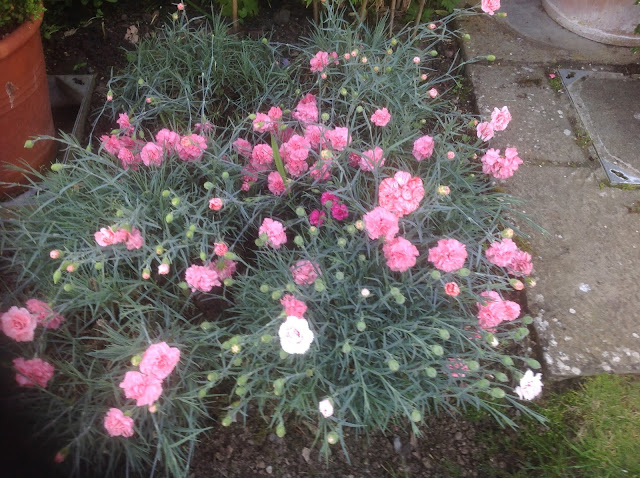 There are three categories of pinks: the alpine for rockeries and planted bowls, garden pinks for floral display, and scented pinks.
The most popular border pink is 'Mrs Sinkins', which flowers May/June and has white flowers with a tinge of red, plus an abundance of scent.
Garden pinks come in all shades of colours and will give a glorious array of flowers throughout the summer. They are ideal for planting among your herbaceous plants as ground cover. When the flowers have finished, cut the stem to within 3 inches of the base, then new shoots will appear for a second round of flowers. 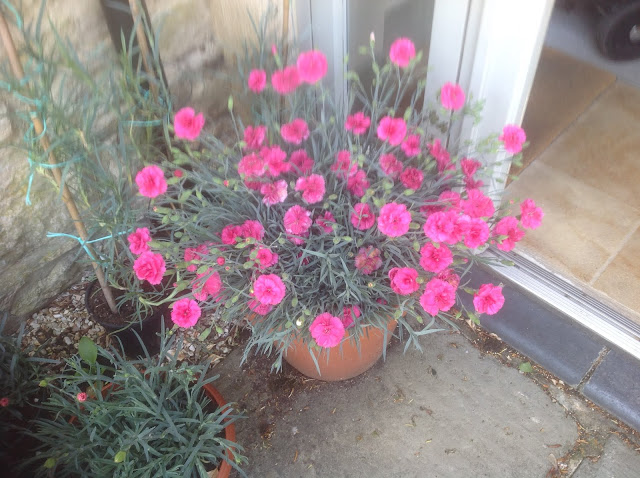 Scented pinks can also be grown in borders but they thrive best in tubs or bowls producing many flowers for cutting and using within the house.
When planting tubs or bowls, it’s advisable to put three plants in each container using a John Innes No 3 compost with extra fertilizer content. This type of soil-based compost will grow stocky plants with upright growth. Feed your plants before the first flowering ready to encourage a second flowering. Recommended varieties are 'Doris' (pale shell-pink with a red eye) 'Memories' (white), 'Haytor Rock' (scarlet streaks on pale pink), 'Gran's Favourite' (white with purpley-pink edges), 'Pinball Wizard' (pink and white flecks), and 'Houndspool Ruby' (like a pinky-red version of 'Doris'). 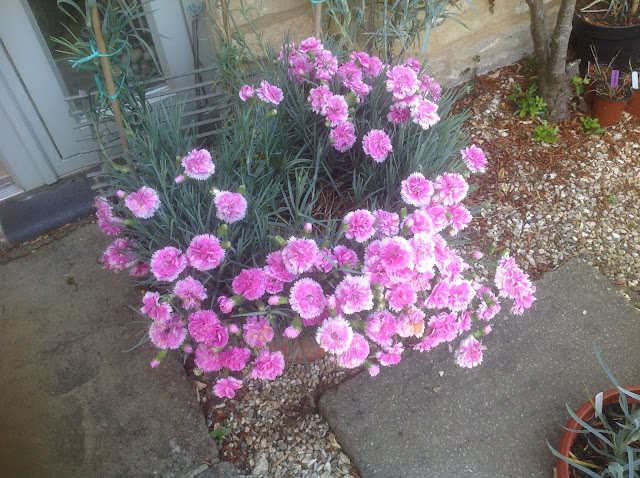 When the young shoots are growing, they are attractive to greenfly, so to deter these from ruining the plants, spray with a bug killer all over the foliage on a cool evening, then they will not appear.  The smell puts them off.
Pinks grown in the garden are drought resistant, but in containers you need to observe the moisture content. If you let them dry out, this can severely restrict the plants, and prevents them from flowering profusely.
After the winter, when you check your containers for new growth it is advisable to spread Chicken Pellets or Growmore over the surface. This will then wash in and enhance the plant growth. When flowering commences, repeat the feed process to get a second flush of flowers.
Pinks originate from eastern Europe. They were introduced into England in 1665 and traditionally they were used in posies mixed with damask roses. The name of the genus, Dianthus, comes from Greek, and means "flower of the gods". In Christianity, pinks have come to symbolise divine love, as in Rapahael's painting, The Madonna of the Pinks.