George Says: Grow your own tomatoes

March 28, 2020
How can staying at home take up so much time? I meant to post this yesterday, but didn't get round to it, thanks to various chores which took longer than expected.
The UK is in lockdown because of the coronavirus, so when you go to the supermarket at the moment, the stores are only allowing so many customers in at a time, and spacing out the queue so people don't have to stand next to each other. As you enter the store, you're given a trolley by one of the staff, who has wiped it with hand sanitiser.
At the checkout, the queue is spread out again to leave at least a metre between each customer.
This is very sensible, but means a shopping trip takes three times as long as normal. Then I had to deliver shopping to the three people who asked me to pick stuff up for them because they are unable to leave the house. It was great to think I was doing my bit to help - I felt like the Pony Express!
So here is the Bibury Gardening Club newsletter on growing tomatoes. I'm going to call this newsletter George Says, because it's written by club member George Blackwell. George's family used to breed fuchsias, so he knows his stuff.

First, choices are required, Do you intended to grow in a greenhouse, a growbag, potato bag, a tub, or hanging basket? Then which colour tomatoes do you wish to grow? Yellow, red, black? Jumbo-sized, medium or cherry?

In a greenhouse, use a growbag to provide fresh sterilized compost, place three plants within, and position three canes for the plants to climb as they grow. 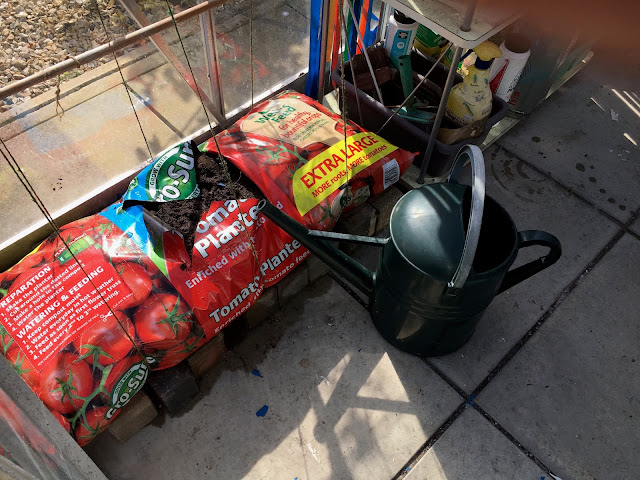 Before you plant up your growbag, give it a good watering so that the soil is completely damp. String is used here to support the plants instead of canes

Take out the side shoots, and continue to tie the plant to the canes. Once fruits begin to appear, feed with Tomarite every time when watering as per instructions on label. Enjoy your harvest!
To use a growbag outside find a sunny position. For tubs, potato bags and so on, follow the same growing instructions.
Don’t forget in warm weather to water the plants daily as the compost will be full of roots and they will need a lot of moisture. 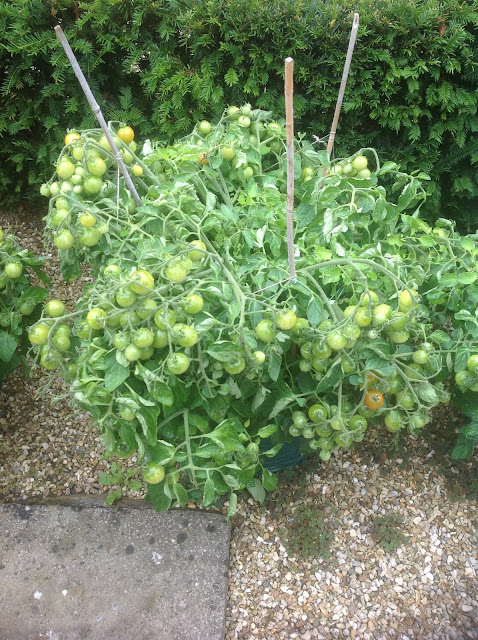 This hanging basket variety is 'Tumbling Tom', a great choice if you only have a balcony or a small garden. You can grow it as an upright tomato and train it up canes

Tomatoes grown in hanging baskets require a slightly different method of growing. When the young plants are 6ins high, take out the tips. This will then allow the plant to shoot out from the leaf axils and make a nice bushy plant.
Place one plant per basket and follow the usual instructions. Particular care must given to the watering as compost in a basket soon dries out. Enjoy your cherry hanging tomatoes!
When growing Tumbling Tom tomatoes in a growbag or tub, you only need to pinch the tip then let the plant grow naturally, but place canes around the plant and tie in. As the growth progresses, and the fruits start to form, the weight will break the limbs unless they are secured.
The large jumbo tomatoes, such as 'Marmande' are good for frying, stuffing or just slicing on to a cheese sandwich. The medium – and most popular – varieties such as 'Moneymaker', 'Shirley', 'Alicante' and 'Ailsa Craig' are the salad and soup type. Cherry tomato varieties include 'Tumbling Tom', 'Sungold' (a golden-orange tomato) and 'Gardeners' Delight', and are delicious when grown outdoors. Because they are small, they ripen quickly, and you are not left with a glut of green tomatoes at the end of the summer.
Enjoy your gardening.

Tomatoes are indigenous to Peru and Ecuador, and were first cultivated by the Aztecs. They were brought back to Europe by the Spanish conquistadores. They are sometimes called Love Apples, and this name is probably the result of turbulent European history. By the end of the 16th century, Spain had gained control of southern Italy and tomatoes started to be used in Italian cuisine. The Italians called them 'Pomodoro', or golden apple, but they were also known as Pomo dei Mori, or Moors' apple, because they came from Spain, where the Moors had ruled for eight centuries until 1492. The French turned this into Pomme d'amour, or Love Apple.  Food for thought!

Casa Mariposa said…
I'm growing a cherry tomato called 'Brad's Atomic' that is colored with iridescent colors and stripes. It has a disco vibe to it and is said to be very sweet. That's good enough for me! The seeds were very easy to grow and I have loads more plants than I need so some of my friends will be growing this tomato, too, they just don't know it yet.
29 March 2020 at 02:12